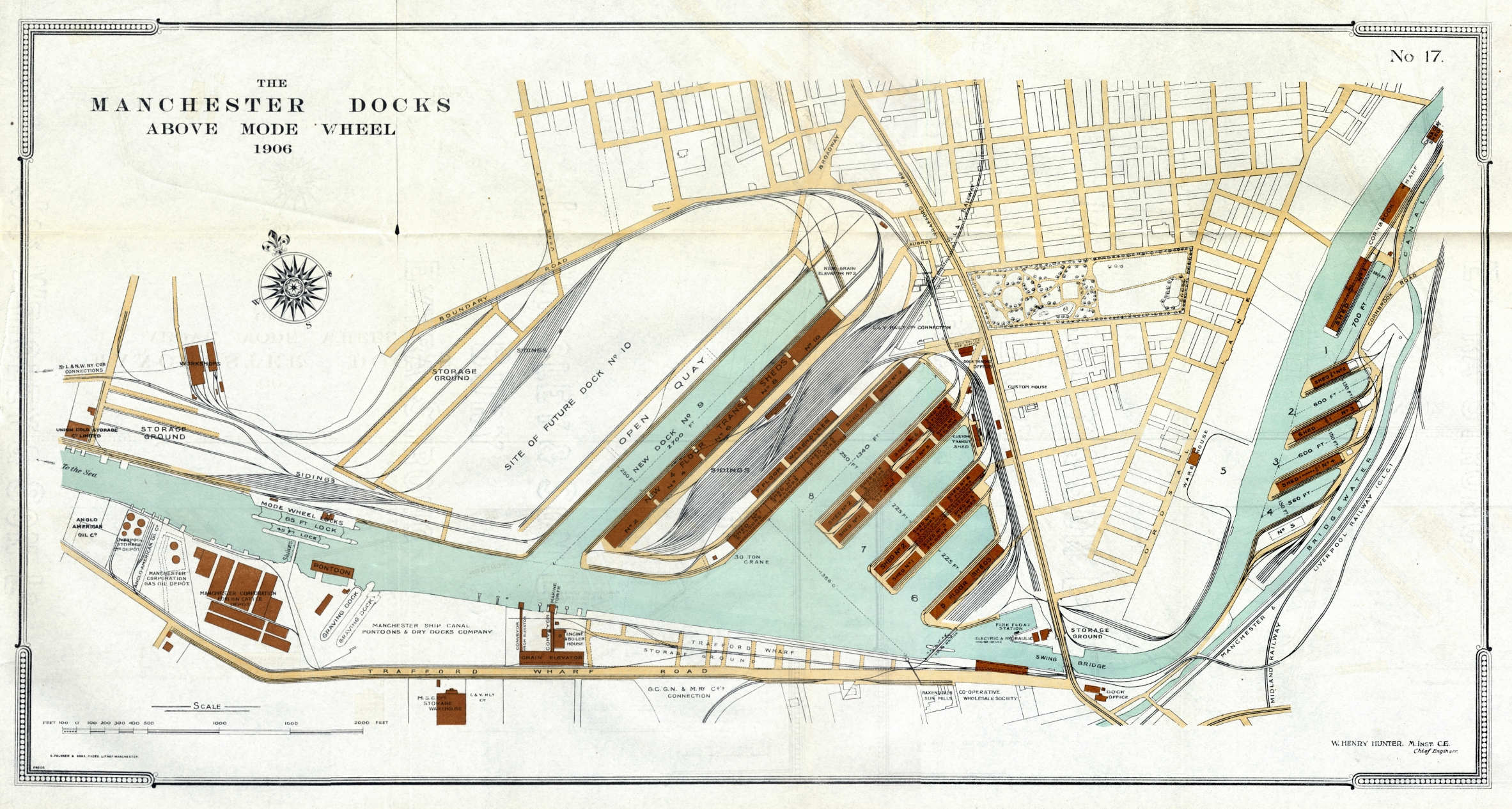 Plan of the "Manchester Docks" mainly located on Salford side of river.

On Thursday January 9th 2020, the members and visitors were enthralled by a very well illustrated talk on “Manchester Goods for Manchester Docks” by two volunteers of The Daniel Adamson Preservation Society, Mr. Chris Evans and Mr. Les Green.

They shattered a few ‘myths’ we in the North west, think we know about the Manchester Ship Canal, and replaced these with the real rough politics and manuverings to get the canal built and its rise, prosperity and gradual decline at the upper Manchester end, with today its income source being at the sea end, where its new owner combines it with the Liverpool dock system.

A talk in the art deco saloon of "the Danny", the home and purpose of the The Daniel Adamson Preservation Society, 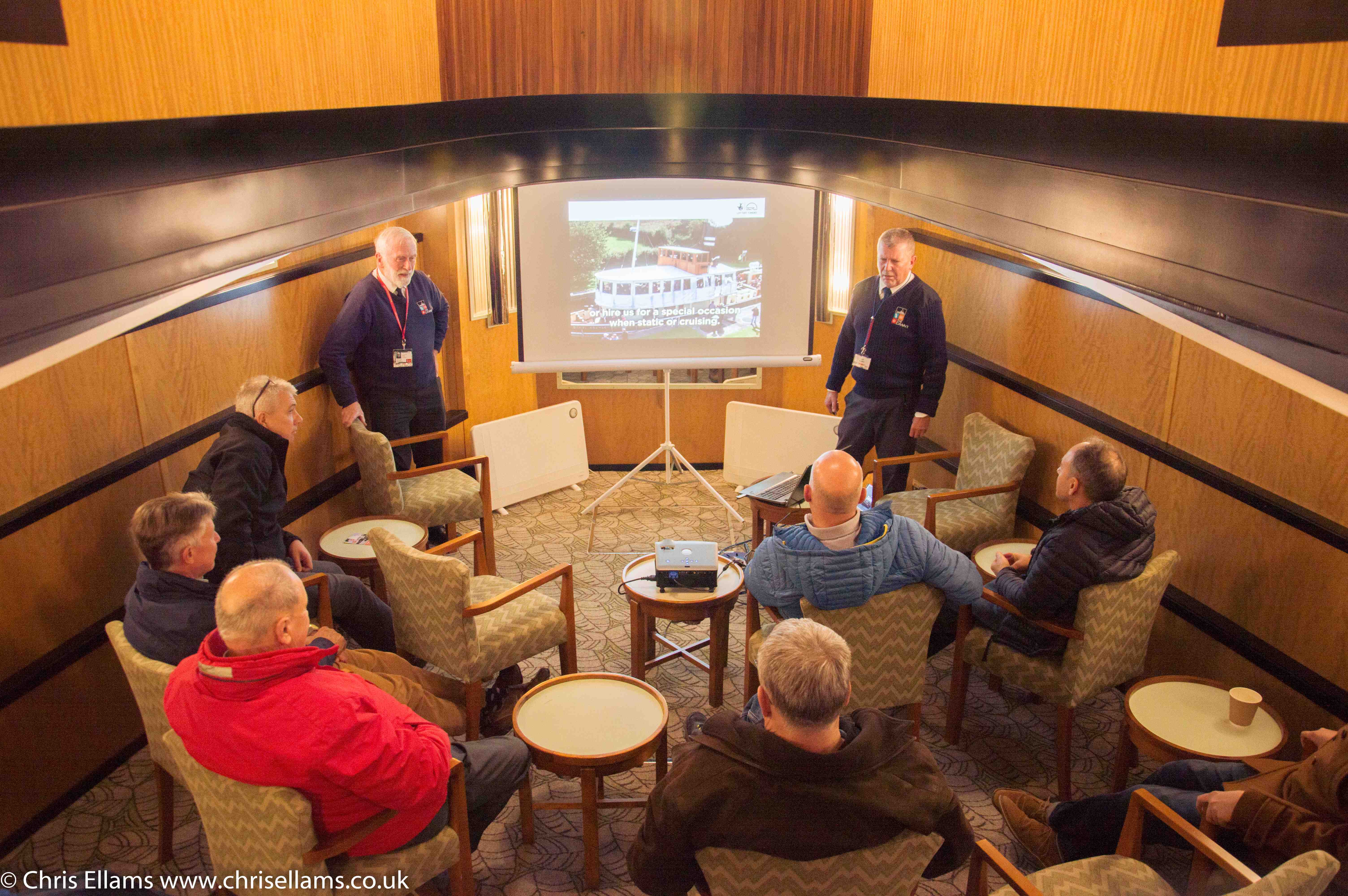 “Manchester Docks” was actually located in Salford, a different city across the boundary river “The River Mersey”, which has since before Roman times been a linguistic, tribal, economic and political boundary.
Only in recent times has the “Salford Quays” development used its actual location in Salford correctly. It was named “Manchester Docks” due to the financial impetus and board majority of Manchester Council of the Manchester Ship Canal decreeing the “Manchester” name. 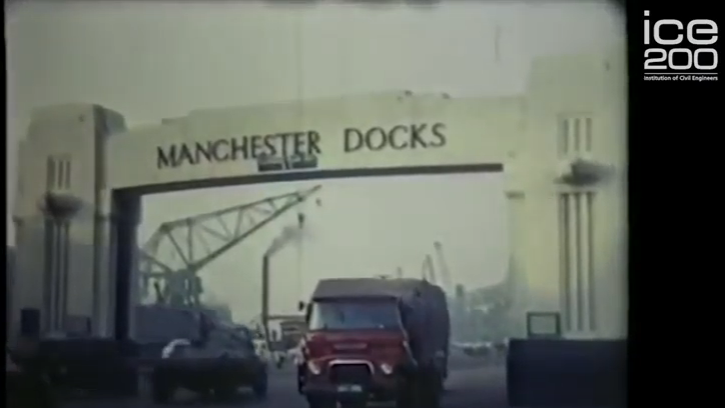 Old name above entrance gate. Below the gate as now 'unnamed' in Salford Quays 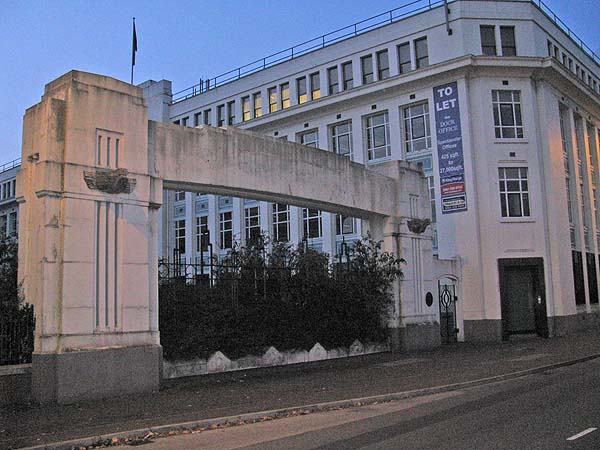 Photo entrance to The Manchester Docks located in Salford on the North side of the boundary river The Mersey.

The canal was built mainly by hand labour.
While the canal employed many ‘navigators’ to dig, shape and make the canal, the owners had used their capital to buy many steam powered excavators from Germany to do the main ‘ditch digging’. They were using the latest available civil earth moving technology and running these on their own site railway. The hand labour was used to enable its construction while relieving the economic unemployment situation of the day. A political point for publicity and obtaining finance. 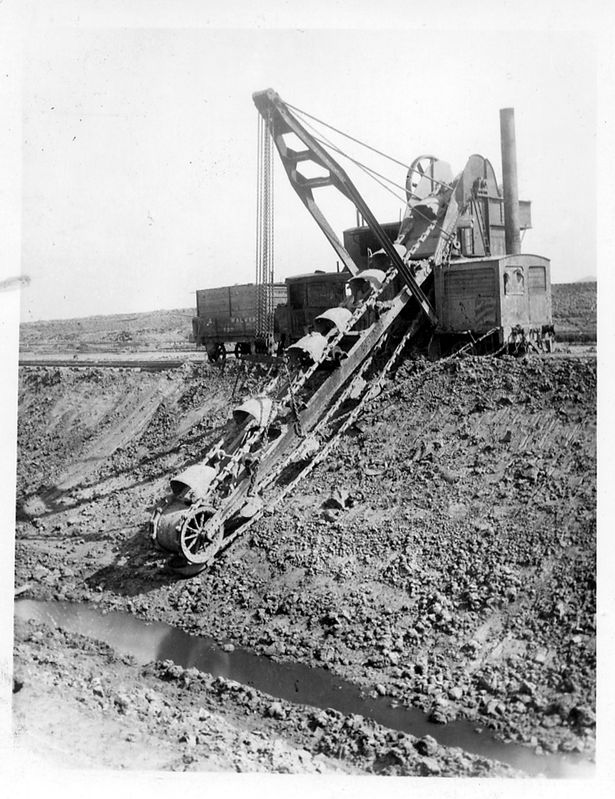 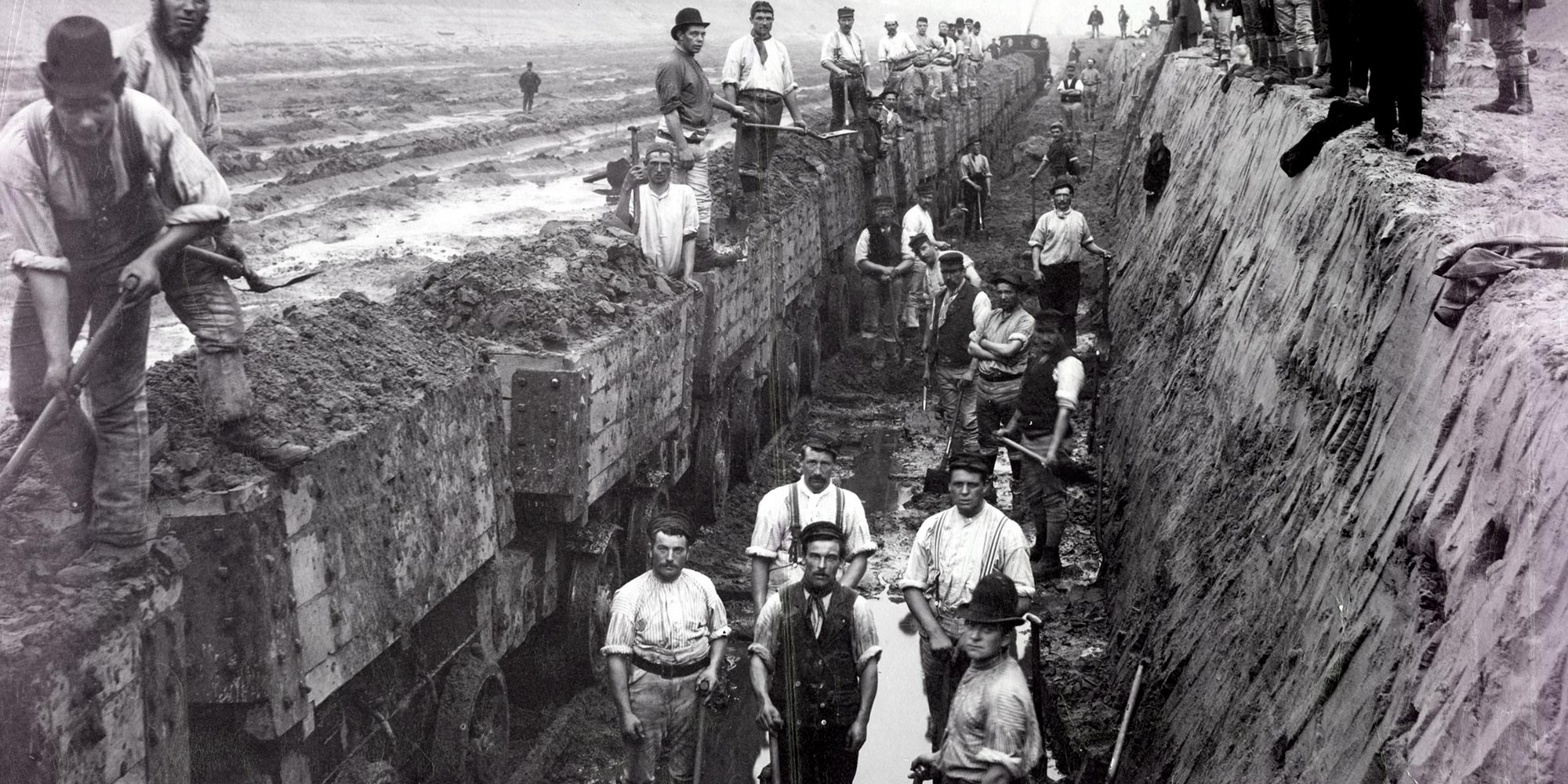 Many attempts were made to translate the idea into reality, pushed on by the idea instigator and main negotiator Mr. Daniel Adamson to ensure co-operation of the towns outside Liverpool on the Mersey to work to set up the finance and organisation to ‘get it dug’.

The history of the Manchester Ship Canal is well documented elsewhere and in better style than the writer could condense to record the talk for our members, so we show some images and references to the history.

The canal and its extensive land holdings were eventually incorporated into a land developer’s company as he saw the land use being much more important than the canal, with the building of much larger container vessels being out of gauge for the canal, even though the Manchester Shipping Company (whose vessels were built to the canal gauge) tried small container ships to get direct from abroad into Manchester.

Link to  video on "The Peoples Canal". An old ITV documentary/commentary.

Description. Probably Ray Gosling's finest work. Originally shown on Granada TV in the early 1990's tracing the history of the Manchester Ship Canal. The programme was in two parts with part one giving details of the canal's construction and part two explaining how we, the public were short changed when the land around the docks was sold off to developers to construct Salford Quays.

Granada TV show now on YouTube. Good video on construction and financial history of canal .
NOTE: Due to being twice compressed from original show recording the sound channel is distorted in volume.

1. Thanks for sharing. As Cameraman on this two part programme [originally] shot on BetacamSP I can confirm this Trade Films production passed all the stringent ITV engineering scrutiny. [Thus sound did not overwhelm.] On YouTube you are watching/Listening to a VHS copy that has been compressed twice by the time it gets on to Youtube. Great to see it again, Ray Gosling was great to work with, still think about him.

Short History of Manchester Ship Canal is on website

Institution of Civil Engineers
Umar Saleem, of  Mott Macdonald, talks us through the Manchester Ship Canal that arose out of need when Manchester established itself as a world leader in industry in the 19 century. It was a huge project that cost 15 million pounds (1.5 billion by today's standards) and employed 1600 people to build it. 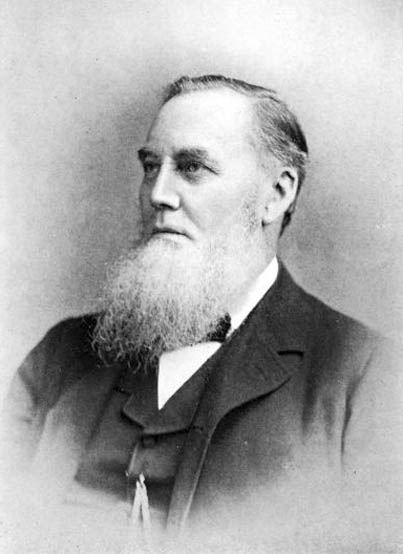 Photo of painting of Daniel Adamson

Short text on Daniel Adamson ex Wikipedia.
Daniel Adamson (30 April 1820 – 13 January 1890) was an English engineer who became a successful manufacturer of boilers and was the driving force behind the inception of the Manchester Ship Canal project during the 1880s.     Adamson was a champion of the Manchester Ship Canal project. He arranged a meeting in Didsbury at his home, The Towers, on 27 June 1882, attended by 68 people including the mayors of Manchester and surrounding towns, leaders of commerce and industry, banker and financiers. Also present at the meeting was the canal's eventual designer Edward Leader Williams. Adamson was elected chairman of the provisional committee promoting the ship canal, and was at the forefront in pushing the scheme through Parliament in the face of intense opposition from railway companies and port interests in Liverpool. The requisite Act of Parliament enabling the canal was finally passed on 6 August 1885, after which Adamson became the first chairman of the board of directors of the Manchester Ship Canal Company – a post he held until February 1887.

As a result of his resignation, the first sod was cut by his successor, Lord Egerton of Tatton, the following November.

Adamson remained a strong supporter of the project but did not live to see its completion in 1894. He died at home in Didsbury on 13 January 1890. Daniel Adamson and Co remained a family business until 1964, when it was sold to Acrow Engineers Ltd.

The good folk of the The Daniel Adamson Preservation Society had prepared a talk with many photographs and to the great delight of our group and visitors short ‘Videos’ showing old film archives of both the opening of the canal and shipping on the canal including their own boat “The Danny”, which the society has rebuilt, preserved and operates on the lower reaches of the canal.
Hire of The Danny and trips are available at fixed prices. A time table is given on their website https://www.thedanny.co.uk/

An illustration of a talk being given in the art deco saloon of The Danny is at the top of this article.

The short videos of the boats and ships operating on the canal were most appreciated by our members and guests.

Railway private. Largest private railway in UK  link below is to a German language site on the railway.

Open in Ghoogle Chrome browser with translation set up.

The Manchester Ship Canal Railway (MSC) was a purely industrial railway that only transported goods and was therefore neither affected by grouping in 1923 nor by nationalization in 1948. It remained independent until the end of 2009. The route network was around 320 km long at its greatest extent. 75 locomotives and around 2,700 freight wagons ran on this network .
It was operated by the Manchester Ship Canal Company .

It connected the Manchester docks to the Trafford Park industrial estate. Connections to the London and North Western Railway and the Lancashire and Yorkshire Railway were in the north of the canal . South of the docks was a connection to the network of the Cheshire Lines Committee (CLC), a joint company of the Great Central Railway , the Great Northern Railway and the Midland Railway .

Special steam locomotives were built for the tight radii in the docks. On the machines with the 0-6-0T axis sequence , the middle wheels had no wheel flange and the coupling rods had a hinge that allowed several centimeters of side play. From 1959, diesel locomotives were also used.

In addition to some locomotives, an earlier Toad Brake Van has been preserved and is owned by the National Waterways Museum. The MSC bought this brake van in the 1970s from British Railways , which had taken it over from the Great Western Railway in 1948 .

Since the MSC had no passenger traffic, it only had a single passenger car. The so-called Directors Saloon , with which the directors of the MSC drove, has been preserved and is now in the Staffordshire Museum (photos see web links). 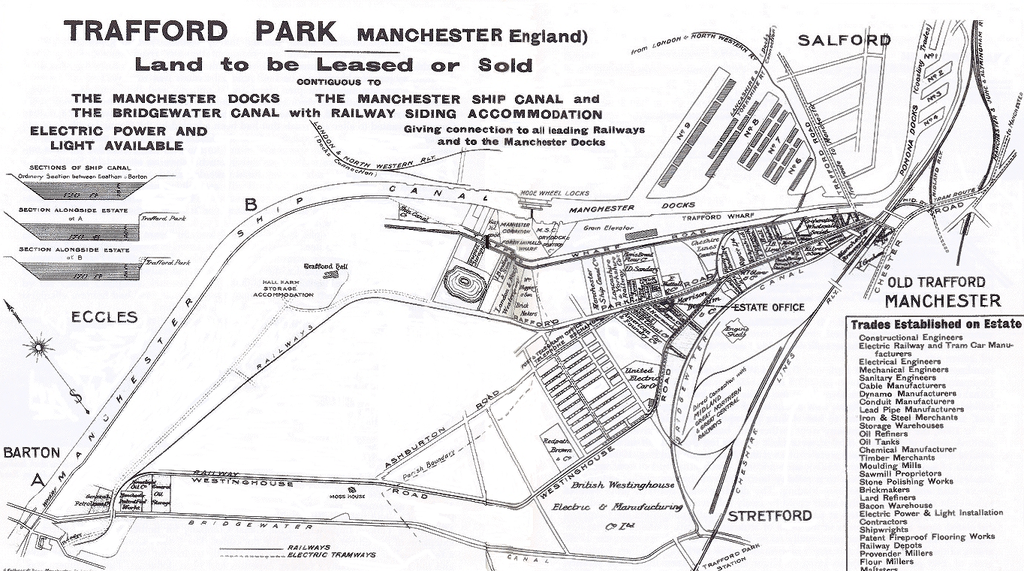 The 1910 book on the early history of the Manchester  Ship Canal, is available as a PDF without any maps.

Its many maps are archived by a Manchester academic on a separate website.

PDF book in two volumes (out of copyright) These can be downloaded.

History of the Manchester Ship Canal, from its inception to its completion, with personal reminiscences

The maps from the book are on the academic  website given below. 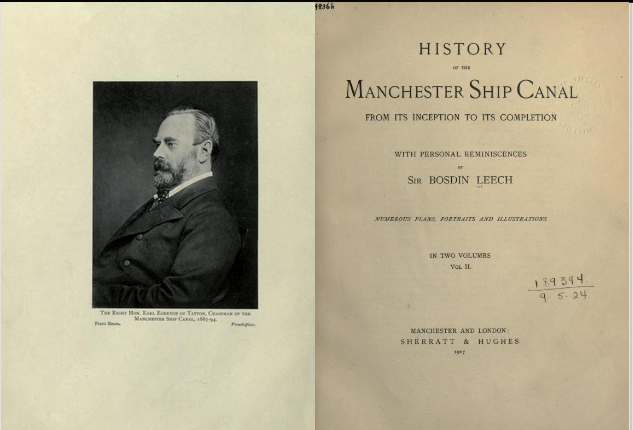 Song of the canal.

The members and visitors give our grateful thanks to the work of the The Daniel Adamson Preservation Society, Mr. Chris Evans and Mr. Les Green who by their presentation gave  a delightful evening to us,

Donations to The Daniel Adamson Preservation Society can be made through their  website:


The Danny was rescued by our volunteers so that its heritage would reach present and future generations.

We want to reach all sectors of the community through a range of activities targeted at different ages, abilities and interests.

In 2020, we will be running a number of family activity days, folk events, and choir performances, offering a programme of workshops
for scouts, guides and cadets and providing engaging days out for families who have a family member with autism or learning differences.

Where possible, we keep community activities free of charge, and instead ask our public to make a donation if they can afford it.
For workshops and activities where we need to cover costs, we keep costs as low as possible.

The donation button via paypal is at the bottom right of their website home page.

Daniel Adamson made his money from his boiler works. 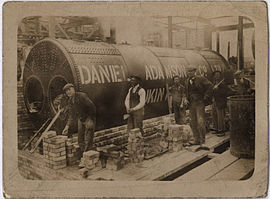