On Thursday September 12th, 2019 Mike Kenwright gave the members and guests a well illustrated talk on "The Mersey and Irwell Navigation" many slides from his private collection of the public and private maps and views in paintings and photographs accumulated by him over many years.

His enthusiasm and knowledge passed to the audience and we learned new things some of considerable interest and astonishment.

Working horses can live to 62 years of age.
A big cheque was issued at company take over.
The development of Mersey Flats as a type of shallow draft sailing boat.

We strongly recommend visiting website
http://www.pittdixon.go-plus.net/m+i-nav/m+i-nav.htm
as a summary of subject maitters included in the talk, but by different authors.

Copyright and source of all images are acknowledged. Advise if you require amendment. 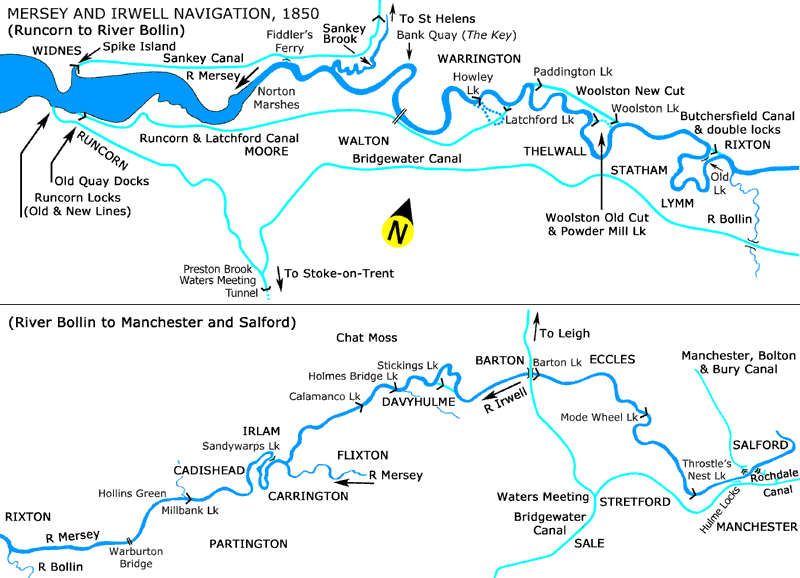 The best painting of the horse is the “Old-Billy-Portrait” in our local Warrington Museum and it would be appropriate for horse lovers or others to visit and see it.
This portrait also shows a Mersey flat in the river background.
Another painting shows him with his carer in pension-hood Mr Harrison who had known the horse for 55 years. Billy was the subject of paintings by several 19th century artists, the best-known being Charles Towne (in Warrington Museum) and William Bradley. Bradley painted Old Billy in his retirement in 1821, the year before Old Billy’s death.
Links:

[image when approved for issue.]

Links:
The shallow draft under sail local boats, developed for the Mersey and Irwell canal, later with tow paths being horse drawn by horses like Old Billy when winds were unfavourable

A painting of a Mersey Flat from The National Waterways Museum is given on website:

Mike told about the The first big cheque issued in UK to settle a long running takeover when the existing canals “The Mersey and Irwell” and its competitor “The Duke of Bridgwater's Canal” were taken into ownership of the Manchester Ship Canal (MSC), to allow the MSC to be started.
Business was slow and ruthless and needed help in Parliament to get the rights to develop as well as raising the money to be put at risk in the adventure in trade to improve transport links

Quotation of history of Mersey and Irwell Navigation which summarises the talk.

The idea that the Rivers Mersey and Irwell should be made navigable from the Mersey Estuary in the west to Manchester in the east was first proposed in 1660, and revived in 1712 by Thomas Steers. In 1720 the necessary bills were tabled. The Act of Parliament for the navigation was received in 1721. The construction work was undertaken by the Mersey & Irwell Navigation Company.[1] Work began in 1724, and by 1734 boats "of moderate size" could make the journey from quays in Water Street, Manchester, Coordinates: 53°28′46″N 2°15′23″W to the Irish Sea.[5] The navigation was suitable only for small ships, and during periods of drought, or when strong easterly winds held back the tide in the estuary, there was not always sufficient draft for a fully laden boat.

Eight weirs were constructed along the length of the route, and some short cuts were made around shallower parts of the river, with locks, to enable the passage of boats. Some difficult turns along the river were also removed.

The navigation was modified and improved on a number of occasions. A canal section known as the Runcorn and Latchford Canal was added in 1804, to bypass part of the lower reaches. In 1740 the company built quays and warehouses along Water Street in Manchester.

In 1779 a group of businessmen from Manchester and Liverpool purchased the navigation, and began making improvements. A difficult section below Howley lock was cut out by the building of the Runcorn to Latchford Canal, and at Runcorn a basin was built for boats to wait for the tide.

An aqueduct was built from Woolston Cut, to replace water lost from the locks that were used to raise boats into the new canal section.

The company in charge of the navigation was known by several names. These include "The Old Navigation", "Old Quay Company", and "Old Quay Canal".

In 1872, the navigation was sold to the newly formed Bridgewater Navigation Company for £1,112,000, but it had by then fallen into disrepair. In 1882 it was described as being "hopelessly choked with silt and filth", and was open to 50-ton boats for only 47 out of 311 working days.

Economic conditions deteriorated during the mid-1870s, in what has been called the Long Depression. The dues charged by the Port of Liverpool, and the railway charges from there to Manchester, were perceived to be excessive; it was often cheaper to import goods via Hull, on the other side of England, than it was to use Liverpool, about 35 miles (56 km) away. A ship canal was proposed as a way to reverse Manchester's economic decline by giving the city direct access to the sea for its imports and exports of manufactured goods.

The construction of the Manchester Ship Canal obliterated large parts of the earlier navigation, including almost the whole of the Irwell part of the course (except for a short length upstream of Pomona Docks, which is the only surviving part of the navigation today).

A short way downstream of the confluence with the Mersey, the ship canal followed a more southerly course than the old navigation, which remained in use as late as 1950 from Rixton Junction downstream.

The lower reaches of the ship canal from Eastham to Latchford obliterated a large section of the Runcorn to Latchford Canal, leaving just a short stub joining the navigation to the Canal near Stockton Heath. The Woolston New Cut, excavated in 1821, is still visible although completely dry. Woolston Old Cut, built in 1755, still exists although the lock is gone.

There were originally eight locks along the navigation. Each lock chamber was 13 feet wide by 65 feet long.

Throstles Nest Lock was the highest on the navigation. It was followed by Mode Wheel lock. Lock 3 was at Barton-upon-Irwell, next to James Brindley's original Barton Aqueduct. The remains of the lock island appear to be situated in the same location as the island presently used for the swing aqueduct. Stickins Lock followed, in a 600-yard (550 m) cut. There were further locks named Holmes Bridge, Calamanco, Holmes Bridge and finally Howley Tidal.

[Image from Wikipedia of canal as lock map] 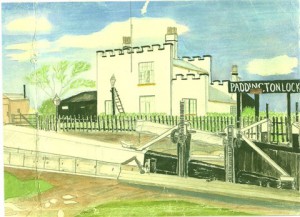 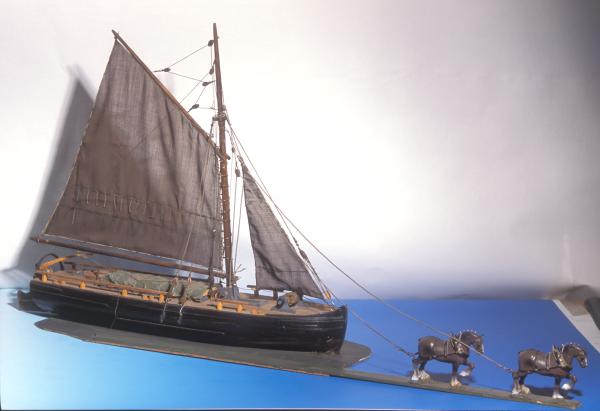 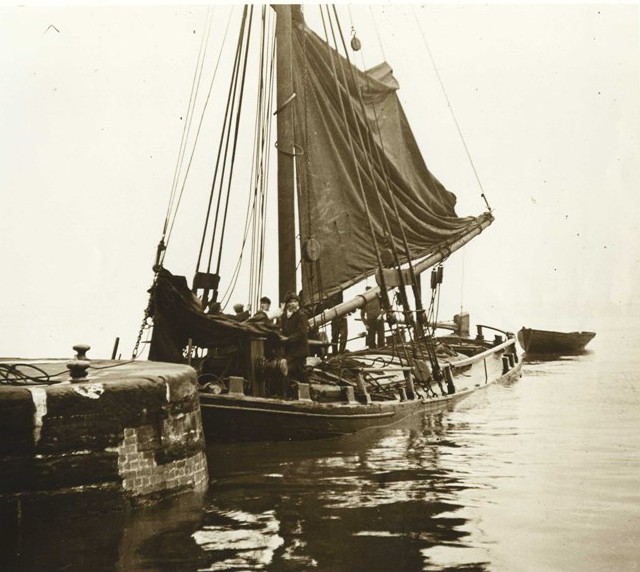 Ex NewCutTrail article.
The Flat in the photo appears to be a sloop rigged craft (i.e. single triangular main sail with a smaller foresail). This was the most common type of Flat. What is slightly unusual is the number of men working her, most craft were crewed by two men and a boy.

Cycling on the New Cut trail 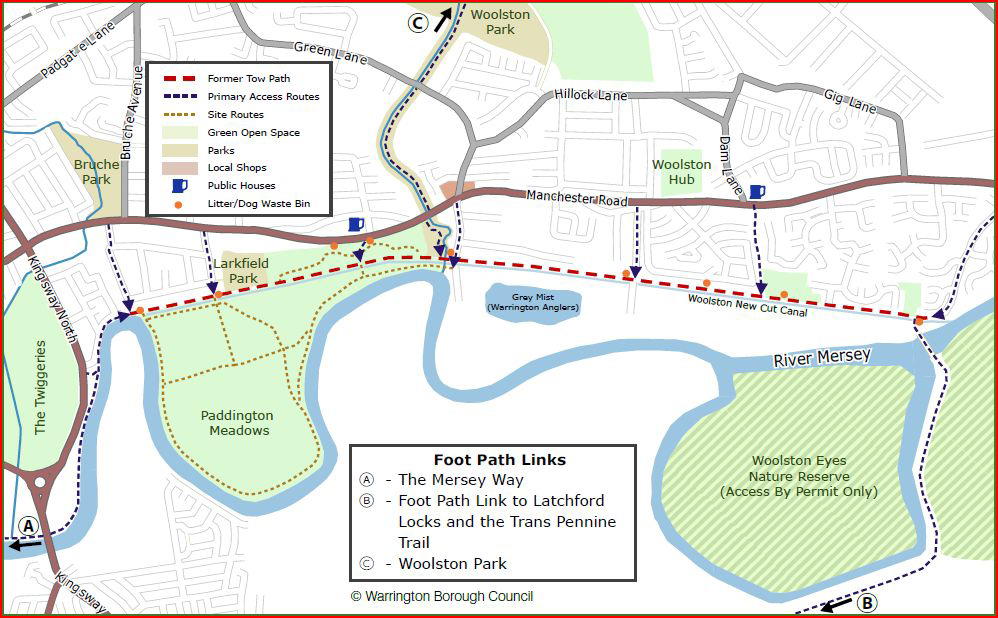 The members and guests thank Mike Kenwright for his dedicated hours of study and accumulation of illustrations which gave us a simple history of a most complex undertaking by the adventures of the canal era.